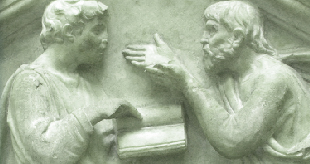 This page is still under construction.
A Chronicle of My Life
1945-1951 — West Los Angeles, California

I was born at a military hospital in Torrance, California, on June 6, 1945 (the first anniversary of D-Day). Roosevelt had died a few months earlier, and Truman was now president. VE-Day had just happened, but Hiroshima, Nagasaki, and VJ-Day were still a few months away.

My parents were Gordon Anderson, at that time an Air Corps pilot stationed in south Asia, and Peggy McGinnis Anderson. Both had grown up in Los Angeles. My father was a native of California and graduated a straight-A student from University High School. My mother moved from the midwest before school age and graduated, likewise with high honors, from Los Angeles High School; she was also an athlete: tennis player, swimmer, diver. Both were just 21 at the time of my arrival. I am told that my father and I did not meet until his return from Asia at the end of the year.

We lived in a bungalow behind the modest home of my grandparents, John and Ardath Anderson, on Carmelina Ave. in West Los Angeles, one block from the boundary with Santa Monica. My grandfather was a machinist with the Union Pacific Railroad. My grandmother, a graduate of Ohio State University, was head librarian at a branch of the Santa Monica Public Library.

My maternal grandfather had died many years earlier, and I have no memory of my mother's mother, who died when I was 3 or 4. Relatives of my mother whom I do remember (from later years) are Aunt Nan (my mother's great aunt), Toddy (my mother's grandmother), and Uncle Beach (my mother's uncle). There was also my mother's younger brother Buddy, whose family I got to know some during the fifties, before they moved out of state.

I really don't recall much from those years, needless to say, though photos have produced some memory-like recollections — for example, that our dog was a wire-haired terrier named "Hubba." I also know from later reports that my father worked for Citizens National Bank (where he'd gotten a job right after high school, before joining the Army) and was doing very well at it, advancing rapidly.

My sister Bonnie was born on February 6, 1948. True to form, I have no actual recollection of that event and its impact on my life, though the tiny house may well have been getting very small.

I started kindergarten at Brockton Avenue Elementary School in January of 1950 and left half way through first grade, when we moved away in the summer of 1951, soon after I had turned six. I have no memories of that school, my classmates, or my teachers. However, I do remember that I received good grades for the 3 Rs and very poor marks for my (disruptive? uncooperative? disobedient?) behavior in class.

In about 1959 or so I met the Rev. John Zimmer, minister at the local Methodist Church. His was the strongest and most lasting influence on me during my high school years, challenging me to think beyond the materialism implicit in the scientific world view that I was so taken with and introducing me to topics that were both intellectually stimulating and spiritually challenging.

Winter and Spring quarters: Stanford in Germany (Gruppe XIV), in Beutelsbach, a village outside Stuttgart. Met Serafin Craig. She and I extended our stay in Europe for two months to study German at the Goethe Institut in Passau, returning to the U.S. in late August of 1965, more comfortable (if not quite fluent) in German — she more so than I.

Declared my major to be German, primarily to study German philosophy (which was not of much interest to the Stanford Philosophy Department in those years). Continued at Ketchum's, where we had a year-long study of the Plato dialogues. Began my study of Ancient Greek. Met Mitch Miller, who was to become a lifelong friend.

Returned home summer of 1966 to work driving a delivery truck for a company that retailed ball bearings. Also proposed marriage to Serafin, and she accepted, but we became disengaged a few months later.

Continued at Jon's house. Did much of my study independently, with a focus on hermeneutics (Schliermacher, Dilthey, Heidegger, Gadamer). Continued with Greek, and also took first year Latin. Graduated "With Great Distinction" (translated from Latin for Californians) with a B.A. in German in June 1967.

Remained in Palo Alto during the summer and taught with Mitch Miller an intensive first year Greek course to a group of about 10, most of them residents or assciates of the Ketchum house — I'm certain Mitch and I learned much more than our students did.

One year of graduate study at the University of Chicago. Spent a lot of time studying Goethe, ancient Stoicism, and Jakob Boehme, but also had long spells of depression.

Arrived with Jon Ketchum at Oakstone Farm in June, 1968, where a group of us began turning a farmhouse into a residence for a dozen would-be scholars.

Taught English at St. Mary's Diocesan High School for three years (1968-71) before returning to graduate studies at S.U.N.Y. Buffalo — first in Comparative Literature, then in the Classics Department (with a focus on Greek philosophy and literature).

Serafin and I finally got married on May 14, 1972, in a small public park in the town just east of Clarence Center. Our 3-month honeymoon was a transcontinental camping trip...

We moved from Oakstone Farm to an apartment near campus. Serafin started Medical School in September of 1972; I think that was the year I transferred to the Classics Department.

Serafin did two years of residency at in pediatrics at Children's Orthopedic Hospital. We lived in a house right across the street from the hospital's front door, in the otherwise rather posh neighborhood of Laurelhurst. Meanwhile I worked for a year or so as an assistant in the workshop at Sitka Design, which sold furniture near the not yet renovated Pioneer Square; after that I taught ESL (English as a second language)...

During these years I became involved with a local Episcopal church (St. Stephen's).... Gene Webb....Centerpoint...

Serafin worked for National Health Service at a pediatric clinic in very depressed area of Chester...Bought our first house...Taught Koine Greek to two women at the local Episcopal Church (including reading Mark in the original). I tried unsuccessfully to complete my dissertation (on Plato's Charmides) while helping care for two toddlers... Saw a Jungian therapist about anxiety and depression; eventually we decided that getting a job would help. Hired by John Spicer at Axxess (Mountainside, NJ) to do software development.

Moved to New Jersey because of the new job, but Axxess went out of business two years after I joined the company. Did consulting with two Axxess clients for about a year and then went to work for Steve Adamczyk at Advanced Computer Techniques (compiler front ends). Rocky times for our marriage, but we got through it. The boys went to preschool and kindergarten in the basement of the Presbyterian Church near us, and then went on to first and second grade in the local public school.

We moved to Wilton to place our children in Pine Hill Waldorf School; their teacher was a friend from Stanford and the Ketchum house, Hugh Renwick. I became active with the school, serving for 4 years on its board of trustees. Worked for Digital doing compiler work (Fortran) from 1986 to 1990., leaving to join Steve Adamczyk's new company, Edison Design Group (EDG), in 1990 (C, Fortran, and C++ compiler front ends).

We rented part of a Victorian house in "downtown" Wilton for two years, then moved to our current home on Abbott Hill, not far from Pine Hill and Hign Mowing schools. High Mowing is a Waldorf high school where I did a little part-time teaching through the '90s as well as serving on the Board of Trustees.

Serafin opened a private pediatric practice in 1988 or so, with an office in Milford first and a few years later in Amherst.

For high school Stephen attended Bishop Guertin in Nashua for 9th grade before going off to Northfield-Mt. Hermon. David stayed home and attended High Mowing. They graduated in 1996.

David had a special genius for the cello. Started playing in 4th grade ... first recital at the end of that year ... studied with Cam Sawzin and Paul Cohen ... NEC youth orchestras (every Saturday for 3 years) ... GBYSO his senior year (co-principal cello) ... tours in Italy twice ... Apple Hill 7 summers ...

In 1997 David was diagnosed with leukemia (AML). He was treated at Dana Farber and Brigham and Women's in Boston and finally died in July of 1998. These were difficult years.

Meanwhile, Stephen delayed starting college (Reed in Portland Oregon) until fall of 1998. He left Reed midway through his junior year, remained in Portland for a while, and now lives in Brooklyn, where he makes furniture.

Serafin continued in her practice until 2003, when she was forced to close it because of health problems. I took a leave of absence from High Mowing in 1997 and am now in semi-retirement, supplementing my Social Security check with income from tutoring and other part-time work at High Mowing.